Sometimes it’s easy to forget just how disruptive of a technology electricity was. Once that first lightbulb went on and commercial applications gradually spread throughout the economy, so began a technological revolution that continues to reimagine the world today. Technology constantly builds on ideas that came before, and over time it can turn something revolutionary like electricity into a standard utility. We expect the same for the internet, the revolutionary technology of today, because of the innovation it facilitates and the investment themes that can result. When building a diversified investment portfolio, we believe it is important to include exposure to themes where adoption is rising, priming a portfolio to capture the economy’s shifts from old to new.

The U.S.’ path to electrification began slowly. Edison’s first power station on Pearl Street in New York City serviced just 82 customers when it began generating in 1882. Two years later, service reached only about 500 customers.1 Surprisingly, it took nearly 80 years for the country to adopt what we now know is a basic and much needed utility, with the most rural areas of the country not gaining access to electric power until 1960.2

Since the discovery of electricity, various technologies, including the cell phone and the internet, took time to reach full adoption. These technologies now have become a necessary stepping stone for future technologies. Establishing the infrastructure to ensure new technologies are accessible and affordable has a major role in adoption. Digital connectivity is currently the new frontier for the adoption and development of new technologies. The rate of adoption has accelerated and as the digital age matures and expands, we expect the pace of technological adoption to further accelerate. 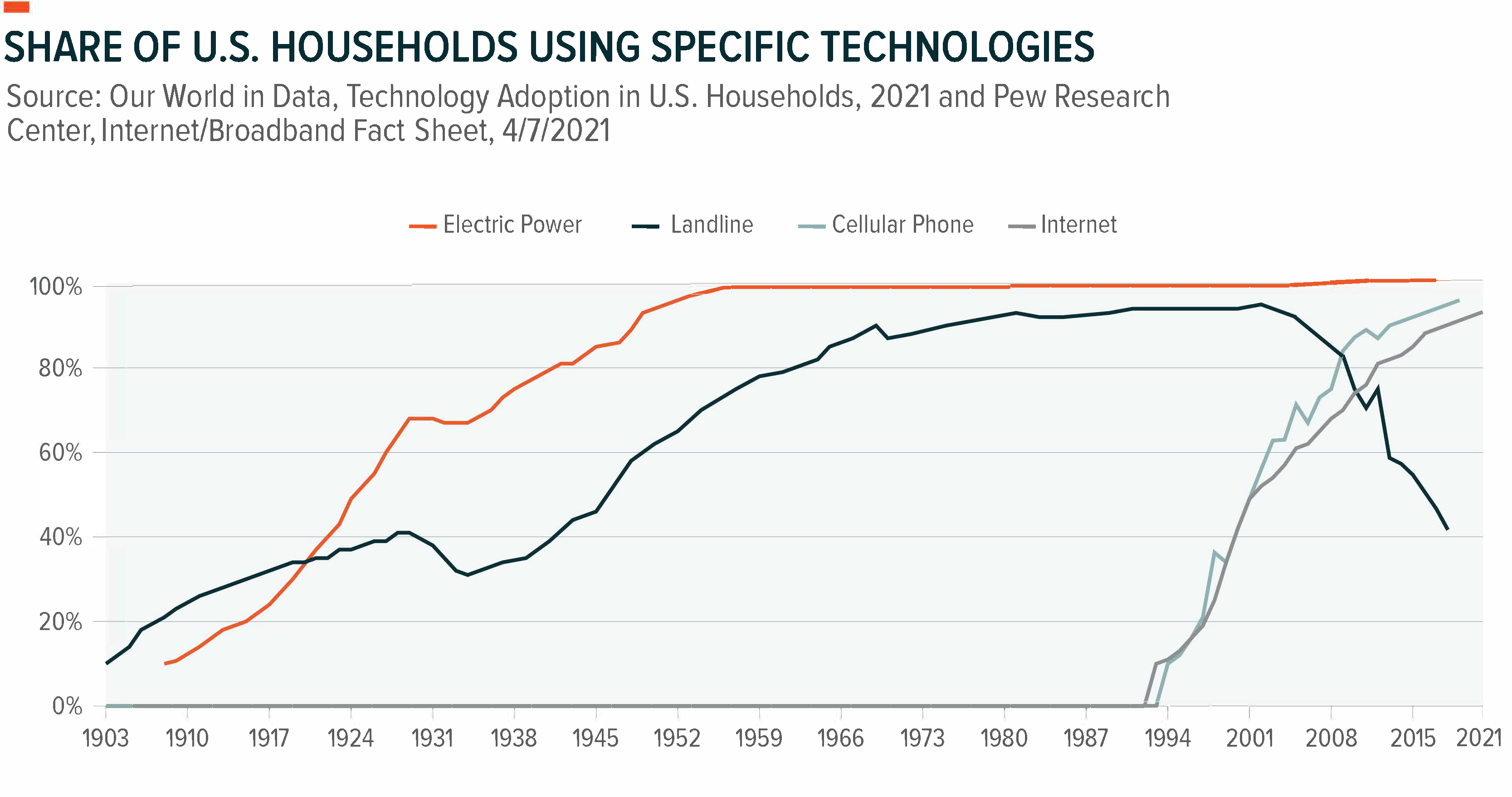 A New Kind of Infrastructure

We think of the internet and its connectivity as infrastructure, no different than a road, bridge or electric grid. Digital connectivity is the backbone on which future technology is built. Cloud computing, social media, e-commerce, cybersecurity, AI, robotics, big data and so many other disruptive technologies—and investment themes—would not exist without the internet. Another one of these up-and-coming technologies is 5G.

Digital connectivity is essentially a pathway where different technologies intersect. And when they do, new possibilities open-up. For example, social media revolutionized how people communicate and how businesses advertise. Utilization is high, but we are potentially still in the early the stages of the monetization of these platforms. Subscription services channeled through social media is one such route to monetization that appears to have momentum. Social media payments, or the intersection between social media and fintech, is another growing trend that stands to benefit from greater acceptance of digital payments.

Building Portfolios That Speak to Innovation

When innovation begets innovation, it accelerates adoption and technological advancement. That makes keeping up with innovation a moving target for investment portfolios. Some technologies become ubiquitous, but not all innovations gain the critical mass required to succeed. Diversification is critical, both in terms of companies and themes.

When creating a forward-looking portfolio, we believe it’s important to include several themes that have the potential to travel along the adoption curve at differing paces and provide diversification across multiple sectors, industries, and regions. As themes are adopted, economies of scale may be realized, reducing marginal costs and improving profitability. As technologies move along the adoption curve, they have the potential to become increasingly similar to a utility or staple.

For example, cloud computing and cybersecurity were essential during the pandemic even though they remain relatively early in their adoption. Like the internet, cloud computing is a theme with far-reaching applications and utility-like potential. In the future, computing power could be completely centralized, with cloud-based on-demand access. Content delivery and cloud gaming are two other future focused examples.

We expect technology-based themes will become a more significant portion of mainstream indexes as themes move along the adoption curve. Thematic equity is a future-focused segment of a client’s portfolio and offers the potential to drive performance deviations from standard benchmarks. Exposure to these structural shifts can add dynamism to a portfolio. It can also spark deeper, more personal conversations between financial advisors and their clients about portfolio construction and how innovation affects their lives. Thematic investing can be a tool that can identify relatable narratives that help investors pursue their long-term investment goals with more clarity.

What’s Old Can Still Be New

It took about a century to jump from electricity to the internet. Today, the internet’s the base from which new technologies connect our economy. We can’t say for sure whether Thomas Edison would be surprised by how influential the wall socket became. But we can say that without this boring utility, the internet and many of the investment themes that we track would not be possible. In that sense, sometimes what’s eventually thought of as basic should remain in our mind as innovative.

1Americans for a Clean Energy Grid, For Electric Transmission, 135 is the New 30, 11/1/2017
2Lewis and Severnini, Short- and Long-Run Impacts of Rural Electrification: Evidence from the Historical Rollout of the U.S. Power, Dec. 2017

Investing involves risk, including the possible loss of principal. Diversification does not ensure a profit or guarantee against a loss. This information is not intended to be individual or personalized investment or tax advice and should not be used for trading purposes. Please consult a financial advisor or tax professional for more information regarding your investment and/or tax situation.