Blogchain – Scratching the Surface of Bitcoin

What exactly is money? Early humans used common commodities such as salt, furs, and agricultural products to settle transactions. Over time, precious metals became a more standardized method of exchange, before their heft and risk of theft prompted a transition to paper receipts. Today, money comes in the form of fiat currency, backed by governments rather than a commodity like gold. Yuval Noah Harari, the author of Sapiens, defines money beyond the tangible tender. Money, he says, is “a system of mutual trust, and not just any system of mutual trust: money is the most universal and most efficient system of mutual trust ever devised.” Without backing, all we have is collective trust. And if we have that trust, money can be anything.

The next step in money’s evolution may have begun in October 2008. Satoshi Nakamoto, the name used by the suspected creator (or creators) of Bitcoin, published a whitepaper proposing a decentralized currency system that was independent of governments and central banks. Based on cryptography, the technology placed trust in a public and decentralized ledger where transactions could be recorded.

Today, bitcoin has a market value of more than $1 trillion. Questions remain about the best use cases for cryptocurrencies and their underlying technology. Perhaps bitcoin takes over the financial world while fiat currencies fade away. Maybe the underlying ledger technology is what becomes standard and the monetary system operates in a middle ground between the two. One thing is for sure, in 2020 bitcoin is on the minds of many.

The Building Blocks of Bitcoin

Bitcoin’s technological brilliance stems from the innovation of blockchain technology. At its core, the blockchain is a sequential ledger of transactions that cannot be changed after all parties involved agree to the transaction. The ledger is public and is freely distributed as to not be controlled by any particular entity while allowing anyone to add entries. This decentralization has utility, but it can expose the ledger to fraudulent transactions. Cryptography, the “crypto” in cryptocurrency, is the solution.

The ledger uses public and private keys to generate and ratify unique pieces of information. These keys are used to sign each transaction. A signed transaction means that the originator approved the transaction; for example, when X sends money to Y. Only signed transactions are considered legitimate, with each entry requires a unique signature.

After a transaction is signed, it is broadcast to all other nodes holding the ledger for recording. To ensure that all transactions are recorded and in the proper order, cryptographic hash functions are used. Lists of transactions are batched and run through the hash function, whose output links them together across time, building a chain of blocks. The transactions are permanent because any change would change the hash of the block containing it and break the chain.

Blockchain miners play a special roll in this process. Miners group transactions and add them to the chain by running cryptographic hash functions in a race to identify the “correct answer” to a block. They are compensated for their time, processing power, and energy spent via an award of bitcoin. This is how new bitcoin are created and overtime, the number of coins in each reward declines. These changes are known well in advance and are called halving events. A halving occurs every 210,000 blocks, reducing the reward distributed to miners going forward by half.

Because blocks are generated every 10 minutes, halving events occur every four years until the reward reaches zero bitcoin, which is estimated to happen in 2140. The bitcoin protocol clearly states that there will be a maximum of 21 million coins ever minted via the mining process. This limited supply is one of its most prominent claims to fame. There will never be any inflation with bitcoin, and similar to bond issuances falling off the run a growing number of coins are likely to fall into buy-and-hold portfolios where transactions are rare.

When looking at bitcoin’s historical returns, a clear cyclical pattern can be seen. Hype-driven demand crazes shoot bitcoin’s price way up, but when the fall comes, it has been able to hold a higher low than it did previously. The remarkable rise in bitcoin’s price this year looks to be driven by a growing merchant and financial institution acceptance or at least more broad-based intrigue.

Bitcoin typically follows about a four-year cycle that includes a long steady period where the price consolidates around one level, followed by a strong rally cycle due to halving and new groups of interested parties entering the cryptocurrency realm. The cycles have resulted in sharps corrections alongside lower transaction volumes. Over the past decade, we can identify three cycles: 2011–2014, 2014–2018, and the current cycle, which started at the end of the correction in 2018. 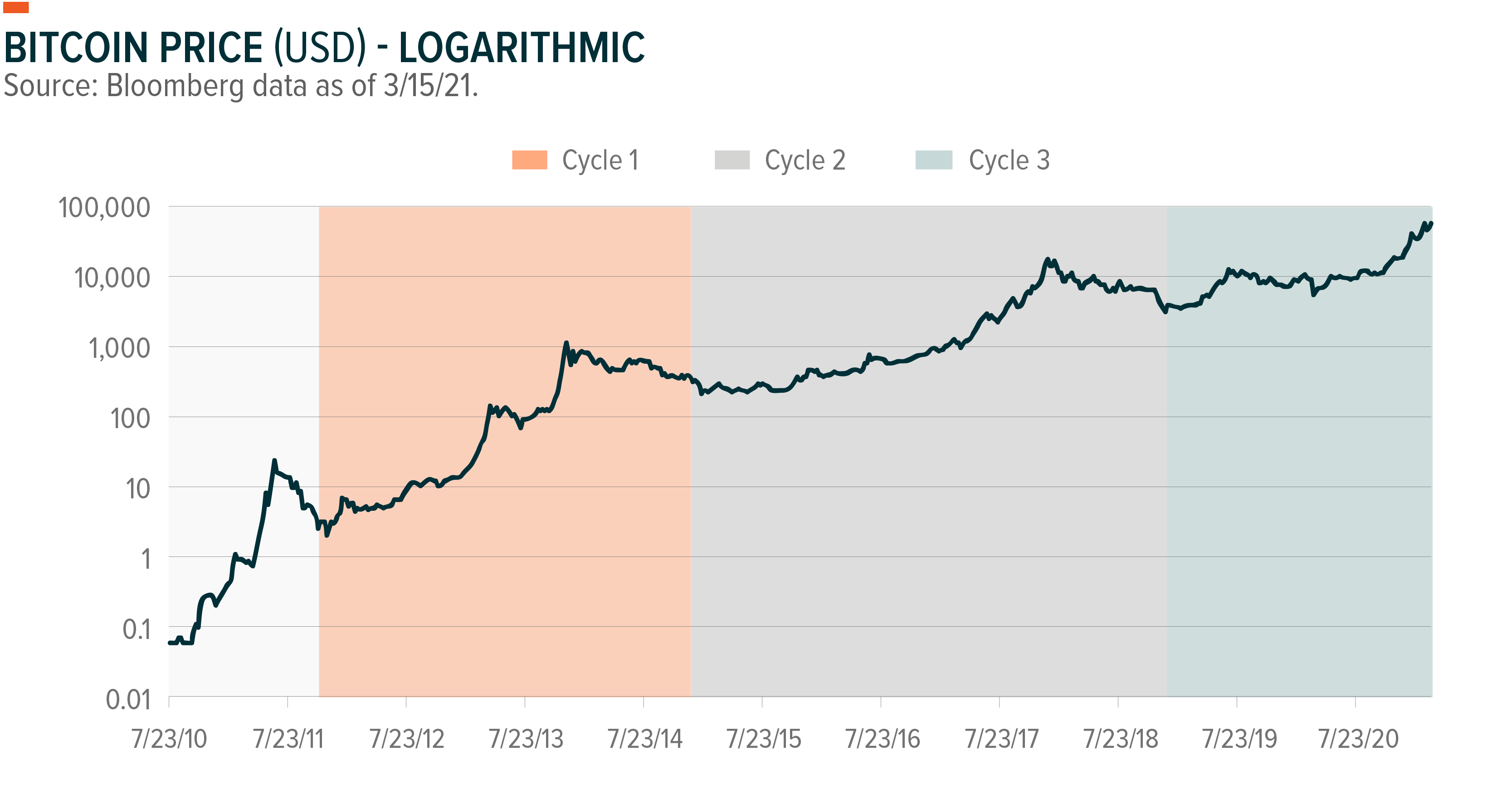 Doctoral researchers Tobias Hubert and Didier Sornette from the Swiss Federal Institute of Technology argue that the repeating and exponentially increasing series of bubbles and hype cycles built the popularity of bitcoin over the past decade and led to its dominant position in the cryptocurrency market today.1 The relatively scarcity of bitcoin makes its market less liquid than traditional assets and more prone to market manipulations, resulting in larger price moves. The wider adoption of bitcoin as a store of value by institutional investors and companies, such as Tesla, is likely to amplify demand and possibly create more volatility.2 With large reserves building among only a few market participants, bitcoin becomes increasingly vulnerable to attacks and fire sales.

Emiliano Pagnotta and Andrea Buraschi, finance professors at Imperial College in London, try to define an equilibrium pricing model for bitcoin considering blockchain’s structure and the security level associated with the transactions.3 They conclude that blockchain’s characteristics and the algorithm will lead to amplified cycles over time (i.e., more volatility), but that bitcoin cycles will be uncorrelated to economic cycles.4

How to Use Bitcoin in a Portfolio

If we look at bitcoin’s behavior over the past 11 years, when it generally moved in one direction, proponents would say its diversification benefits warrant portfolio inclusion. Pagnotta and Buraschi’s findings support bitcoin’s diversification potential. But while bitcoin is often compared to gold, research analyzing the diversification effects of both assets on developed market portfolios shows that gold has considerably higher “safe haven” benefits relative to bitcoin.5

Like gold though, digital assets don’t generate cash flows. The only value is what people are willing to pay. So, without underlying fundamentals beside the perceived scarcity value, prices can rise or fall rapidly, thus the challenge for portfolio inclusion. Another challenge is more technical, how would a cryptocurrency be included in a portfolio managed by a professional in a securities firm as most traditional firms are unable to hold digital assets.

Bitcoin may play a role as a diversifier, but as the table below shows, it has not always fared too well during periods of market volatility. From August 2010, the S&P 500 Index experienced six drawdowns of 10% or more. In half of those pullbacks, bitcoin performed worse than the S&P 500 Index. During the COVID-19-induced market crash from February 19 through March 23 of 2020, bitcoin declined by about 33.3%, versus the 33.8% decline of the S&P 500 Index. When compared to gold and the Bloomberg Barclays Aggregate Bond Index across drawdown periods, the results look even worse.

In the seven periods since 2010 where the S&P 500 Index rose by more than 10%, bitcoin greatly outperformed the index during all periods. Bitcoin outperformed gold and copper by a wide margin as well. Bitcoin provides the potential for outsized gains, although its diversification characteristics are less obvious. 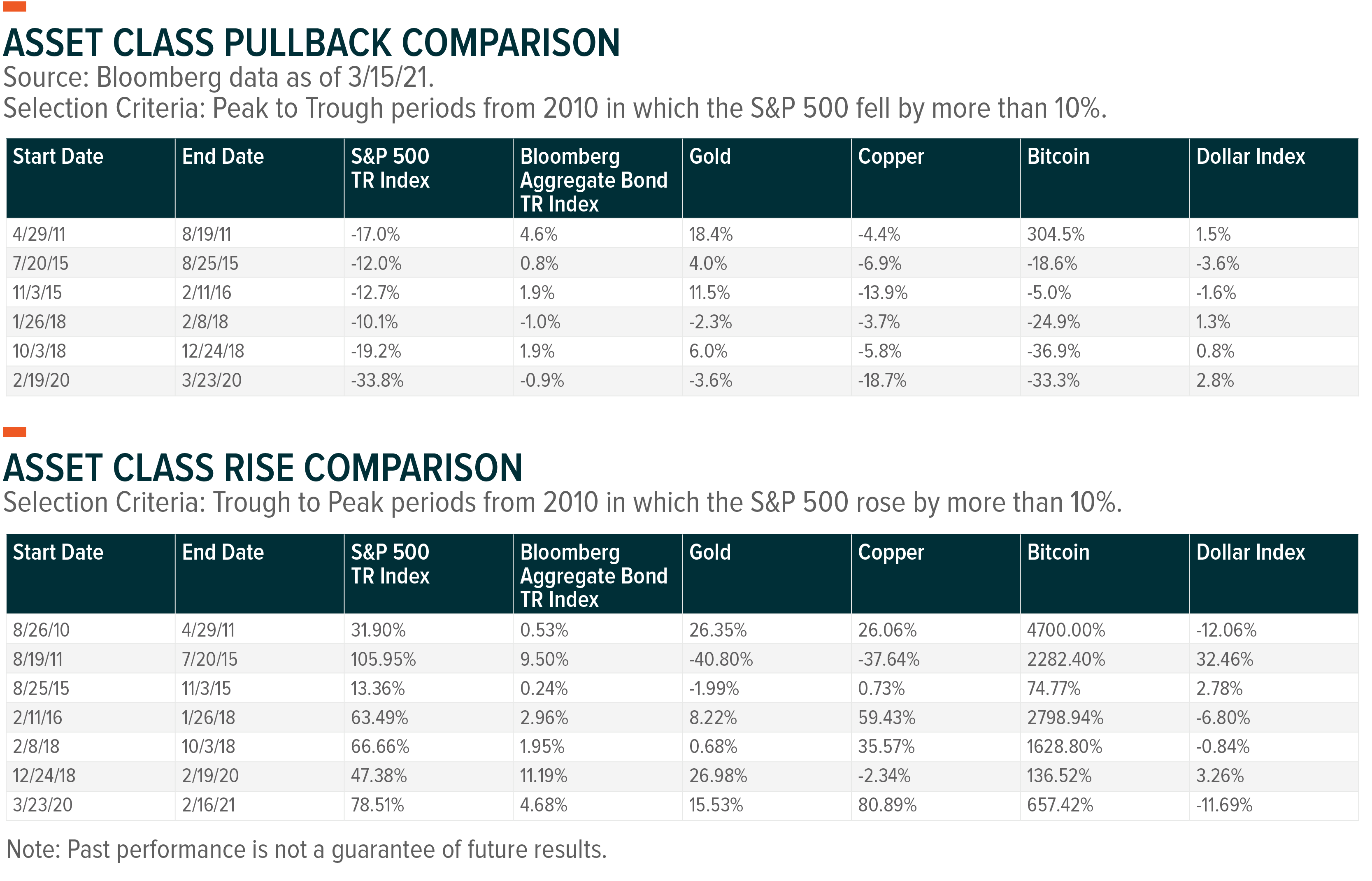 Real-world use cases for bitcoin and other cryptocurrencies aren’t yet fully known, which means that we can’t yet assign true value to them. Bitcoin may prove to be a portfolio diversifier over time, but there’s limited evidence that it can improve a portfolio’s risk-adjusted returns without regular rebalancing. The jury is still out, but we believe bitcoin’s real value may be in its underlying blockchain technology. Risks though persist outside of simple drops in price. About 20% of the existing 18.5 million bitcoins appear to be locked forever in stranded wallets.6 Inaccessible coins represent a rare but very real risk of being your own bank. They also represent the growing pains associated with such a young asset. That being said, the future looks increasingly bright for crypto. With data security becoming a strategic priority, the cryptography of blockchain ledgers should not be underestimated.

Public Key: A piece of information used for encrypting data so that it appears random so that only the intended recipient can decipher and read. This key is publicly available.

Private Key:  A piece of information used to decrypt data previous encrypted by a paired public key. These keys are created using the same algorithms and are bonded mathematically. This key is known only by its owner, and if lost, data remains encrypted.

Cryptographic Hash Functions:  A type of algorithm that coverts an input containing an arbitrary amount of data into a fixed length output.

Dollar Index: The Index measures the value of the United States Dollar relative to a basket of foreign currencies.

Index returns are for illustrative purposes only and do not represent actual fund performance. Index returns do not reflect any management fees, transaction costs or expenses. Indices are unmanaged and one cannot invest directly in an index. Past performance does not guarantee future results.

Investing involves risk, including the possible loss of principal. Diversification does not ensure a profit or guarantee against a loss. There is no guarantee that any trends discussed will continue in the future. Bitcoin and blockchain are new and relatively untested technologies, may never be implemented to a scale that provides identifiable benefits and could be vulnerable to fraud and cybersecurity risk. There may be a lack of liquid markets and possible manipulation of blockchain-based assets and there may be risks posed by the lack of regulation in this space. Competing platforms and technologies may be developed that consumers use instead of blockchain.

This information is not intended to be individual or personalized investment or tax advice and should not be used for trading purposes. Please consult a financial advisor or tax professional for more information regarding your investment and/or tax situation.